Secrets of the Castleton Manor Library

Join Faith Newberry and her cat, Watson, in the quaint town of Lighthouse Bay on Cape Cod in Massachusetts as she marries her love of books to a penchant for sleuthing. After landing her dream job as a librarian at Castleton Manor, an upscale literary retreat, Faith is forced to read between the lines and solve the mysteries she finds between the stacks. Available at Annie's Publishing

Ink or Swim by Catherine Dilts
​In book 14 of the Secrets of the Castleton Manor Library cozy mystery series, Herman Melville’s Moby Dick provides the literary backdrop for a conference during Lighthouse Bay Whaling Days.

"It's all hands on deck when Castleton Manor in Lighthouse Bay, Massachusetts, hosts the New England Whaling in History and Literature Conference. Librarian Faith Newberry marvels at the transformation of the elegant setting into a scene from a rugged high seas adventure. She eagerly does her part to make sure the library is shipshape. But before the conference officially begins, one of the guests makes waves. Raymond Prather refuses to show anyone his valuable scrimshaw that he claims is from a legendary whaling ship. After he exchanges heated words with the other guests, tragedy strikes. Raymond is murdered. The plot thickens when Raymond's widow announces that the scrimshaw is missing. Was Raymond murdered out of greed? Or did his argument about the scrimshaw cause someone to seek the ultimate revenge? Faith and her friends in the Candle House Book Club start to plumb the depths of the mystery. But Faith soon finds herself in deep water, and she fears the killer is trying to turn the tide on her investigation. Will Faith and her friends - along with her courageous cat, Watson - solve the case before someone else winds up swimming with the fishes?"

A Thorny Plot by Catherine Dilts
In book 23 of the Secrets of the Castleton Manor Library, Faith Newberry must dig up clues to the murder of an abrasive TV gardening show host. ​The Secret Garden by Frances Hodgson Burnett provides the literary backdrop for a Castleton Manor gardening retreat.

"The beautiful gardens are in full bloom at Castleton Manor in Lighthouse Bay, Massachusetts. The upscale literary retreat provides the perfect backdrop for the Hidden Treasures Literary and Gardening Retreat as authors, gardening enthusiasts, and horticulturists descend on the manor. Everything's coming up roses for librarian Faith Newberry as she welcomes her parents to the retreat and prepares for her upcoming wedding with Wolfe Jaxon, co-owner of the manor. But her festive mood withers when the retreat takes a disturbing turn and a guest dies. The death is ruled a murder, and Faith and her friends in the Candle House Book Club set out to dig up clues. But their investigation proves to be thorny. The victim had enemies in spades, and the list of suspects continues to grow. Meanwhile, Faith's clever cat, Watson, hits pay dirt when he makes an incredible discovery. How far will someone go to bury the truth? Faith and her friends must root out the sinister plot before someone else is pushing up daisies." 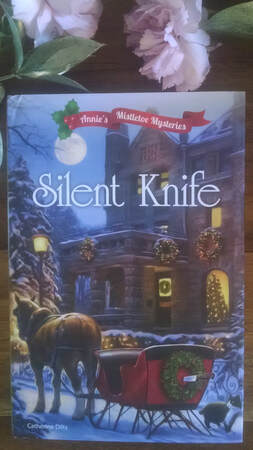 "'Tis the season for treachery when Castleton Manor, a grand literary retreat located in Lighthouse Bay, Massachusetts, hosts a long overdue family reunion. The family has been estranged for decades since a rift developed between two elderly sisters. Librarian Faith Newberry hopes their stay at the upscale mansion will help heal old wounds and give them a reason to celebrate."

Available at: Mistletoe Mysteries
This cozy mystery series is set in New England, and features a new novel every six to eight weeks, written by a different author. Available in hardcover, e-book, and audiobook.
See a listing of the entire series here.

Authors talk about their contributions to the series.
​#13 On Pens and Needles